Video surveillance in the court house and governmental buildings

Are you looking for a video surveillance solution for a court house or other governmental buildings and surrounding premises? Xeoma will be a perfect choice for a security system like that. Here’s why:

Traditional use for safety 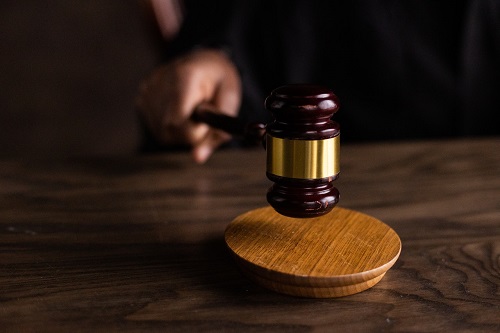 Number one purpose of having a video surveillance system in a court house has traditionally been having video footage of events that can be used for investigation and prosecution in case of crimes committed on the premises – that is, in areas that are allowed to be recorded. Xeoma can save audio tracks as well as video feeds, so that the video evidence provides a full insight into what was done and said, – which can be crucial in solving cases like false information and other service quality complaints. The software renders you with flexibility on whether to use microphones embedded into cameras or standalone IP microphones as the sound source, depending on the situation and challenges. For example, in call centers where one video camera can cover multiple customer care operators while each of them needs their ‘own’ microphone for articulate sound capture.

The second most popular goal of video surveillance in the court house and governmental buildings is the active detection of intrusion like trespassing in off-work hours, or penetration into strict security areas.

Xeoma offers various tools for that – from as simple as the commonly known basic motion detection watching over multiple selected zones (only in Xeoma it is laced with smart adjustments), and intelligent video analytics that can be set to react to certain types of objects – for example, just to people – or to ignore certain types of objects like cars or birds. Besides, with the help of face recognition Xeoma is able to understand if a person in front of the camera is or is not an authorized staff member from a pass list.

Thanks to advanced video analytics of Xeoma software, it’s possible to detect many more events than just intrusion – for example, early signs of a fire. The computer vision-powered smoke and fire detection of Xeoma can be an addition to traditional smoke alarms triggered by CO2 sensors; however unlike offline systems it can also procure visual evidence of the suspicious situation for review before the alarm is triggered.

Detection of abandoned items that detects if an odd object appeared in the frame, and stayed there, can be put to use as an aid in fighting terrorism.

The double authentication feature compares a face in the camera frame to the user profile opened with an access card or a QR code so it can be employed for access automation to restricted access offices.

Advanced video surveillance systems in the court house and governmental buildings with Xeoma also possess over an emotions recognition tool that uses artificial intelligence to detect a person with aggressive predisposition of spirits (and there can be one in a court house indeed) that can turn into a menace, and warn security service to keep an eye on them.

It should be mentioned that presence of video security cameras has a very pleasant side effect: the sight of cameras is a great deterrent that does the best job of keeping people from committing crimes in court houses and governmental buildings, thus cutting losses resulting from the caused equipment or department down time. “Better safe than sorry” the saying goes. Likewise, it’s almost always better to put in efforts to prevent a crime than spend hours on dealing with the consequences after it happens. 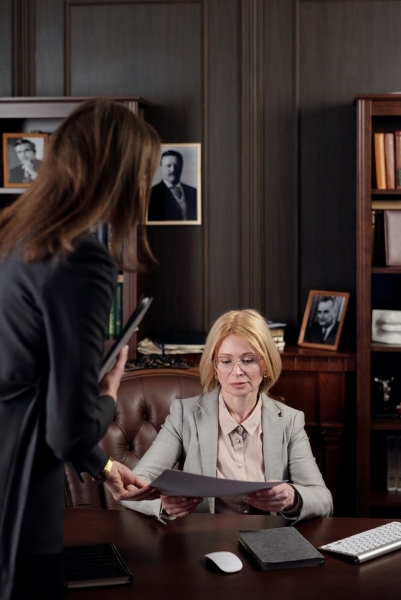 Xeoma supports operation of hundreds, thousands of cameras as it is designed to be used in large sites and nation-wide projects like those for governmental institutions. Therefore, it naturally features multiple optimizations for working in such environments.

For more convenient work with big quantities of cameras, Xeoma features flexible user profiles and access rights to view and manage cameras, their recordings and software functions. Unlimited amount of user accounts with various levels of priority will help to make sure that members of security, management and direction departments are able to have access to those cameras and functions that they logically need to.

Xeoma provides multiple ways to make video surveillance in court houses and governmental buildings an easier job for security officers – even it is about numerous cameras. To draw attention of security operators to alarming events and cameras that captured them, there are sound alarms, windows pop-ups with all cameras or the triggered ones only, push notifications, as well as the attention-drawing color representation of alerts and special icons in interactive maps (read more below). One of examples is the motion visualization that enframes movement in the scenery with green frames thus making it visible at a quick glance.

A video surveillance system can utilize a video wall – multiple monitors to display more cameras in bigger resolution so that no important detail goes unnoticed. Xeoma supports video walls and offers various grids and tab modes to adjust the best camera layout for each operator separately or in bulk.

But of course even without a video wall cameras can be managed in a convenient way so that everything important is seen. With the grouping feature cameras can be divided into groups according to their geographical location or any other trait that will make sense in your system. Set the automated switching between group tabs at regular intervals so that cameras are viewed in bigger boxes than when all cameras are all in one place which will display more details.

A special mode for obligatory view of triggered cameras is complemented by interactive maps in Xeoma – the feature also commonly called an ‘eMap’ – that visualize alerts on the floor plan picture and allow for a quick camera access directly from the map. 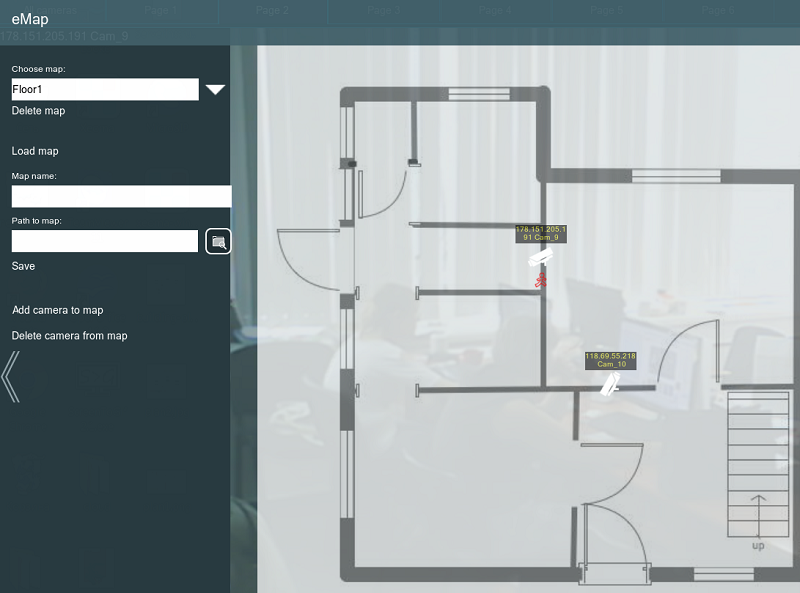 Automation
Government services are often subject to optimization and reform programs. Surprisingly, software for video surveillance in a courthouse and administration can help with this, too! Modern-day solutions based on computer vision can help automate collection of statistics on the attendance of these institutions, which can replace or supplement traditional statistics and evaluation systems.

A fine example of that is the already mentioned emotion recognizer that can be repurposed to evaluate satisfaction level of visitors with the services provided, since with the artificial intelligence knowledge base the module can distinguish between 7 basic human facial expressions representing emotions. Besides, this feature does not impose hard-to-meet hardware requirements or over-the-roof pricing, and works with an unlimited number of people in the frame in the fully standalone mode. 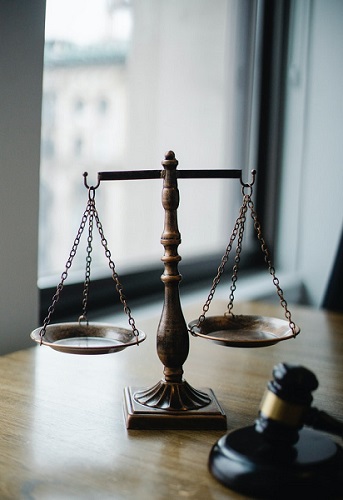 Face recognition will take down the time of a staff member entering and leaving the premises to a report, which means it can be used to track real working hours of employees and get to know if there are frequent breaks.

The crowd detector will make your system automatically detect if there are more people in an area or office than there is supposed to be.
The loitering detector will see if an employee has not been busy for a long time; and if they left the office completely or stopped activity on the computer, the “motion absence detection” option from the motion detector can be used as well.

Surely, video surveillance can be carried out not only in the court house or administration building itself, but also in the surrounding territory. And here, as well, Xeoma has a special treat to offer.

Automated access control by recognizing license plates with a “pass” list for employees is no longer a miraculous thing to see, rather quite a common sight nowadays in state-of-the-art software like Xeoma. In addition, Xeoma also has the ability to determine the status of parking spaces (free or occupied) and send out notifications about the parking of unauthorized vehicles in private parking spots. The “Parking spots” module can be used for this purpose as well as for defining an empty workplace and similar tasks.

Moreover, with the automatic tracking function, the program can rotate a PTZ camera to ‘follow’ the path of an object of interest moving around the premises. The so called guard (or patrol) tours made of several pre-set positions are also supported for an overview PTZ camera to monitor the general situation over a wide area, stopping and focusing at some points as it ‘travels’.

Certified and used in 140 countries 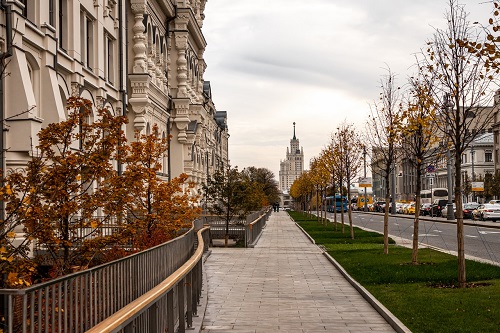 Another factor important in court house and governmental video surveillance is privacy and safety. That’s why video surveillance software Xeoma can work in a completely closed network, without Internet access. Xeoma functionality, including smart modules, works entirely on your hardware, without sending data/photo/video to cloud services (except for when you send emails to an external Email address or use P2P capabilities of third-party Chinese cameras, etc.).

Proprietary protocol in combination with encryption techniques is used for enhanced security of remote connection of administration and operators to Xeoma.

For convenience and control, the program supports working with LDAP active directories.

The ‘Privacy Masking’ module can be used to blur out areas in the footage and live camera view so that the personal data of served clients does not get infringed on, for example, if a camera captures the monitor of an employee.

There are more 100 useful features for video surveillance in the court house and governmental buildings in the Xeoma surveillance app, all of them can be combined to get the best results even in a difficult environment.

As you can see, video security systems have long begun to serve much more functions than just video surveillance.
Xeoma video surveillance software in the courthouse, administration and adjacent territory will lend a helping hand to ensure safety of employees and visitors, as well as optimize work and automate many tasks using video analytics based on computer vision.