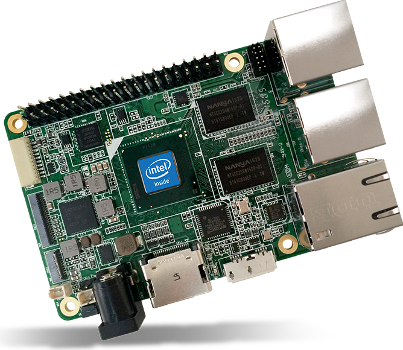 Started as a crowdfunding project at Kickstarter AAEON UP Single Board Computer has grown into a real alternative to Raspberry Pi single board computer.

Thanks to х86 architecture of the Quad-core Intel Atom x5-Z8350 (Cherry Trail) CPU with up to 1.92 GHz, it is well performing under various – even straining – circumstances.

Originally designed for promotion of education and interest in robotics among students, Raspberry Pi doesn’t seem to care about extending network bandwidth capacity leaving it at max 100Mbit/s even in its latest models. This is something that all competitors take advantage of when trying to get a share of the market.

AAEON UP single board computer has this fixed: 1 Gbit/s Ethernet will help you transfer large amounts of data, data analytics on board, in switch, or in cloud, see Internet videos in higher resolution, connect more cameras or devices working over the network.

UP comes in various combinations of flash memory and RAM, and depending on the package cost varies in the range of $99-149:

The cost is way higher than that of a RPI, and it might be the biggest obstruction in UP’s way up.

Nothing of the above said is really new. Raspberry Pi SBC has had a lot of competition since the day it started. Some analogs are cheaper (C.H.I.P. and NanoPi NEO), some are more powerful at comparable price (ODROID C2), some offer ready-to-work boxes (Wintel W8 Pro) for those who want a plug-n-play solution.

What is truly revolutionary is the AEEON’s cooperation with the Raspberry Pi Team. As a result, Up can now work with Raspberry Pi’s extension boards. One of them lets you connect SSD, and the other adds several network perks like Bluetooth, Wifi, 3G modem, + port). Hopefully, more are to come featuring full cross-compatibility between the two boards.

AAEON UP Single Board Computer Up in video surveillance

It may be hard to believe that you can hold a whole fully functional video surveillance system in the palm of your hand, but with AAEON’s UP SBC it’s real. Install an operating system of your choice – Android, Windows or Linux – and download the Xeoma video surveillance software for it. Have your cameras up and running: whether they are USB, IP or analog cameras, Xeoma will find them automatically.

Xeoma can detect motion, sound, unattended objects, or other suspicious events and notify you about them. It can make a camera follow the intruder around, it can ring al alarm or activate other smart home sensors.

You can store your video surveillance records off-site: in Xeoma Cloud where they will be safe and accessible at any moment, in NAS, or in FTP server. For on-site recording, let Xeoma record them to the on-board eMMC and rest assured that Xeoma’s loop recording won’t let it overfill.

Tiny and dynamic, the AAEON UP single board computer can be placed in a challenging environment, for home and business video surveillance, where no personal computers would fit. Are you up for the Up?