You have probably heard of the now gaining popularity Single Board Computers. A variety of “pies”: Raspberry Pi, Banana Pi, Orange Pi, as well as non-culinary ODROID, make robotics enthusiasts’ mouths water: they are cheap, they are productive, and they inspire you to realize your various ideas. If you have always wanted to try this kind of device yet feared you wouldn’t be able to handle the “Linuxy” thing, we have wonderful news for you.

Meet the new solution, ready to work straight out of the box mini PC Wintel W8 Pro, a great alternative to single board computers. A stylish box that you can fit on a palm, and weighting 200-250 grams, has everything in bundle you’d need to replace a desktop computer, including an operating system from the well-known Windows family. This gadget says it loud and clear that SBCs are no longer just for geeks. 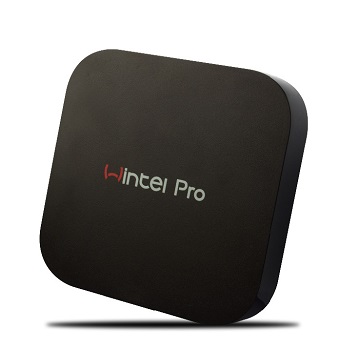 In the box with this cheap mini PC Wintel W8 Pro you’ll also find an HDMI cable, a power supply unit (5W=3А), and a short but quite informative instruction. People who are new to the world of mini PC will be pleased to know that this one has Windows 10 Home pre-installed there. Thus, even a regular PC user will be able to handle this tiny one.

This Intel mini PC can work over the WiFi. However, users say “strength” of its WiFi signal leaves much to be desired. This issue can be simply resolved with buying a WiFi adapter with a 5db antenna for $5-8. That is, if you have a spare slot for it. Anyway, for serious purposes like video surveillance, Ethernet-connection is still preferred. It aids in speeding up data transfer and avoiding intermittent connection.

The heart of this cheap mini PC Wintel W8 Pro is the Quad-core 1.44 GHz Intel Atom (Cherry Trail) x5-Z8300 processor (64 bit) that has been on the market for quite a long time now. It can accelerate up to 1.84 GHz in “rush hours” and is overall quite well performing in entertainment and business. For example, the Edge browser can play the 4K video smoothly, including those from YouTube, games like Asphalt 8 can be played with high detalisation settings, and even Photoshop, the quite CPU-hungry image editor, can work on this device.

Connect a display to the Wintel W8 Pro mini PC, add Bluetooth keyboard and mouse, plug an external HDD into a USB 3.0 socket, and there you have it, a fully functional machine. Download and run video surveillance software Xeoma there, let it find your WiFi, wired or USB cameras, and voila! behold your brand new video surveillance system for just $79.95 ($83-85) and oh-so-familiar Windows.

Summary: although basic cost of ARM-based micro and mini PCs is somewhat lower ($30-40 as compared to Wintel W8 Pro’s $80), the former boards come in a very ascetic (“barebone”) way, and buying the deficient hardware parts for them will result in you having to pay even more. But besides the hardware, Wintel W8 Pro has an advantage in the form of the pre-installed Windows OS. In this way, Wintel W8 Pro will be a great way to save nerves, time and – in the long run – money. Its high productivity allows to use it in video surveillance for processing multiple cameras.