Xeoma is a full-scale video management software and as many complex systems has special tools to make various parts – sometimes very disjoined ones – of the system work in unison.

One of Xeoma’s greatest advantages is its branchy clustering system. First of all, Xeoma allows to connect more cameras to a single server. But even if a multidivisional system is required, with several servers, you can connect them in Xeoma for a unified video surveillance system. Specially designed for enterprise environments, it allows to mitigate the load by sharing it across several servers. Bulk discounted Xeoma licenses for big purchases make usage of Xeoma very affordable but there’s more: Xeoma Server can also be installed on a virtual machine which is a very popular tendency in large corporations where many various components should be run on the same server separately.

You can connect to several servers through Multiserver mode.
Another great key feature of Xeoma VMS is that unlimited number of clients can be connected to a single server. Client connection is free of charge, licenses are only required for the servers.

Failover clustering is a state-of-the-art method to maintain the system’s sustainability and fail-proof work. A cluster of servers that come into play when one or several of the main ones fails or goes corrupted. Even with bulk discounted licenses for large purchases, making a 1-to-1 backup for each server might be costly. That’s why for cost reduction in enterprise environments one backup server can serve several main servers as several servers rarely fail simultaneously.

If there was a connection loss that caused engagement of failover servers, after restoration of the connection, main server will be once again a priority place to process cameras and store records to.

Xeoma supports recording to various disks, NAS, also Cloud.
Recordings can be stored on premises, in server’s internal storages like HDD, USB Flash drive, or SD cards, etc. or a combination of those:

Also, Cloud disks can be used if they are mounted in the system as an “ordinary” disk (volume).

Xeoma’s many-faceted storage clustering also allows to use recording to NAS (network attached storage) – a network storage unit or units that the server has virtual connection to. This could be a single disk:

Or, for enterprise environments, a set of such storage units is often chosen called an array of disks or RAID: 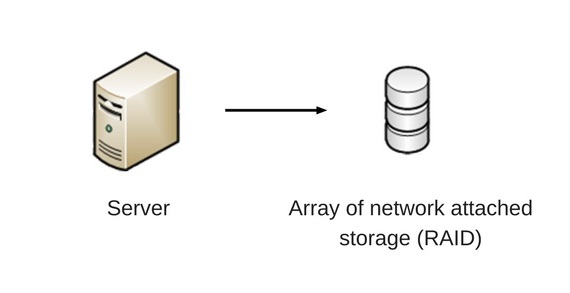 The same NAS or RAID can be used in Xeoma to store recording from several servers:

Read more about LDAP in Xeoma

If you are a system integrator or engineer, or a manufacturer of video surveillance equipment (or automation systems), please contact us to get bulk discounted licenses for Xeoma VMS.